An updated version of the Better Care Reconciliation Act of 2017 was released on July 13th by the U.S. Senate Committee.

Senate Majority Leader Mitch McConnell of Kentucky released a healthcare “Discussion Draft” of legislation, called the Better Care Reconciliation Act of 2017 (BCRA) on Thursday, June 22, 2017, which is the Senate version of the Affordable Care Act (ACA) “repeal-and-replace” legislation American Health Care Act (AHCA) passed by the U.S. House of Representatives last month.  An updated “Discussion Draft” of the BCRA was released on June 26, 2017 with the intention of calling for a vote on the bill before the Fourth of July recess. However, Senator McConnell had to delay that vote after it became clear that it would not get the 51 votes required under the Budget Reconciliation rules to pass.  A further updated Discussion Draft of the BCRA was released on July 13, 2017.  A summary of the updated July 13 draft of the BCRA by the U.S. Senate Committee on the Budget is available here and a section-by-section summary of the July 13 version is available here and here.

The July 13 Discussion Draft largely mirrors the previous draft and its primary revisions are unlikely to have a significant impact on employer-sponsored group health plan coverage.  The revisions to the BCRA in the July 13 Discussion Draft are intended to garner enough support from certain key swing votes by senators who previously expressed reservations about supporting the prior version after the Congressional Budget Office previously reported that it would leave 22 million more uninsured by 2026 than under the ACA while providing tax cuts to the wealthy.  Primary revisions in this most recent version include:

Except for the taxes noted above and the “Cadillac” tax on high-cost employer-sponsored coverage, which would be delayed through 2025, the updated Senate bill would repeal virtually all of the tax increases imposed by the ACA, including the individual and employer mandates, effective as of January 1, 2016.

The major substantive change in the prior updated Discussion Draft released on June 26 was to add a new Section 206, beginning in 2019, that would subject an individual who has a break in continuous “creditable coverage” for 63 days or more in the prior year to a six-month waiting period (in the individual market) before coverage begins.  This provision remains unchanged in the current version of the bill and is intended to provide an incentive for young and healthier individuals to maintain health insurance since the bill would eliminate the individual mandate.  The AHCA proposed imposing a 30% surcharge on those without continuous creditable coverage, but there were concerns over whether that provision could pass Senate parliamentary rules.

The Congressional Budget Office is expected to release its score of the legislation next week and, if there are enough votes, a formal debate of the bill on the Senate floor could follow.  It remains unclear whether the Republicans will be able to secure enough votes to advance the bill.  It has already been reported that Senator Rand Paul (R-KY) and Senator Susan Collins (R-ME) intend to vote against beginning debate next week.   Also on July 13, Senators Bill Cassidy (R-LA) and Lindsey Graham (R-SC) announced that they are developing an “alternative” health plan that would keep much of the federal taxes in place (though it would repeal the individual and employer mandates) and would send much of the federal tax dollars to the states to control.

A comparison of the House passed AHCA and the updated versions of the Senate bills can be found below.

As noted above, the most recent Discussion Draft of the BCRA largely mirrors the previous draft and the primary revisions to the prior versions are unlikely to significantly impact employer-sponsored group health plan coverage.  For employers, the most significant change made by the AHCA to the ACA that was retained by the various versions of the BCRA is the repeal of the employer mandate penalties effective January 1, 2016.  The updated BCRA retains other significant AHCA changes for employers, including unlimited flexible spending accounts, and enhancements to health savings accounts (HSAs).

Of note for employers sponsoring fully-insured group health plans, beginning in 2020 the updated bill retains the provision from the prior version that requires states to set their own medical loss ratio rebating rules.  It also retains the provision from the prior version that would add a structure under ERISA (by adding a new Part 8) that would allow for the establishment of association health plans for small businesses or individuals (Small Business Health Plans or SBHPs), allowing them to be treated as large group plans exempt from the community rating and essential health benefit requirements that are currently applicable to small group and individual plans.  This new section of ERISA would preempt any and all state laws that would preclude an insurer from offering coverage in connection with an SBHP and would go into effect one year after enactment (and implementing regulations would be required to be promulgated within six months of enactment).

Also significant is that the updated bill does not include a provision capping the tax exclusion for employer provided health insurance.  Many employers were concerned that the exclusion would be capped or removed as a way to increase revenue to pay for other tax cuts in the bill.  Nor does the bill repeal the Sections 6055 and 6056 reporting requirements.  It will remain to be seen whether, if the BCRA is passed, the IRS may continue to use the existing ACA information reporting system to determine whether an individual is eligible for a premium tax credit or is prohibited from receiving one in 2018 or 2019 because such an individual has an offer in 2018 or 2019 of affordable, minimum value employer-sponsored coverage.  Or, whether in 2020 and thereafter, the IRS would need information to assess whether an individual has any offer of employer-sponsored coverage to determine eligibility for the premium tax credit.

Other provisions of the ACA that are not changed by either the House AHCA or any of the Senate proposals are:

For individuals, while the July 13th Discussion Draft of the BCRA includes some revisions to Medicaid, like the prior version, it would repeal the ACA’s Medicaid expansion, but at a slower rate than proposed by the AHCA and would tighten the eligibility criteria for premium subsidies (beginning in 2020, only those earning up to 350% of the poverty level would qualify rather than the 400% threshold in the ACA); however, subsidies would open up for enrollees below the poverty level living in states that did not expand Medicaid.  The bill would allocate money for cost-sharing subsidies through 2019, which are used to offset the costs for insurers to offer low-income individuals with coverage that has lower out-of-pocket costs.  There had been uncertainty whether these payments would continue, which was causing instability in the individual insurance market.

However, under the July 13 Discussion Draft of the Senate bill, higher-income individuals would not see relief from the 0.9% Medicare surtax or the 3.8% net investment income tax that in prior versions of both the House and Senate bill would have been repealed.

The Republicans are trying to pass the bill through the budget reconciliation process since it allows them to avoid a Democratic filibuster and to pass the bill with a simple majority (rather than 60 votes).  However, the Republicans have only 52 Senate seats, which means that to pass, Senator McConnell can only afford to lose 2 votes (Vice President Pence can be the tie breaker).  It remains to be seen whether the most recent changes to appease the bill’s critics will be enough to move the bill forward for debate on the Senate floor, where it is expected that senators will propose amendments.  As noted above, it has been reported that Senators Paul Rand and Susan Collins have already stated that they intend to vote against letting the bill go forward and Senators Lindsey Graham and Bill Cassidy announced that they are working on an alternative health plan, further complicating the process.

Majority Leader Senator McConnell recently decided to delay the Senate’s August recess so that the Senate could continue to work on legislation including the BCRA.  If the Senate passes a bill, it will either have to be approved by the House (the two chambers would have to reconcile their differences in a conference committee), or the House could pass a new version and send it back to the Senate for approval.

Employers and other stakeholders should continue to stay the course on ACA compliance at this time while they monitor for changes as the BCRA continues to make its way through the legislative process.

Comparison of the ACA, AHCA, and BCRA

The chart below compares some of the significant changes proposed by the BCRA to the ACA and the proposed House bill. 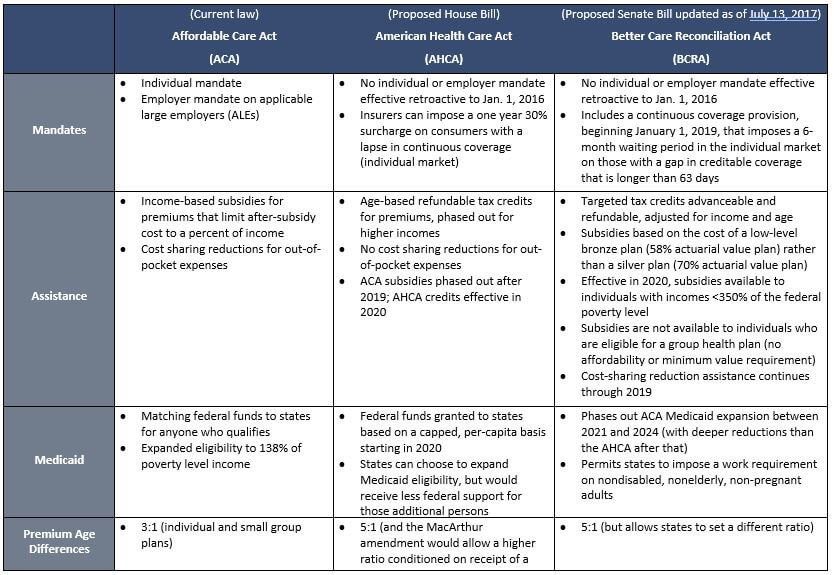 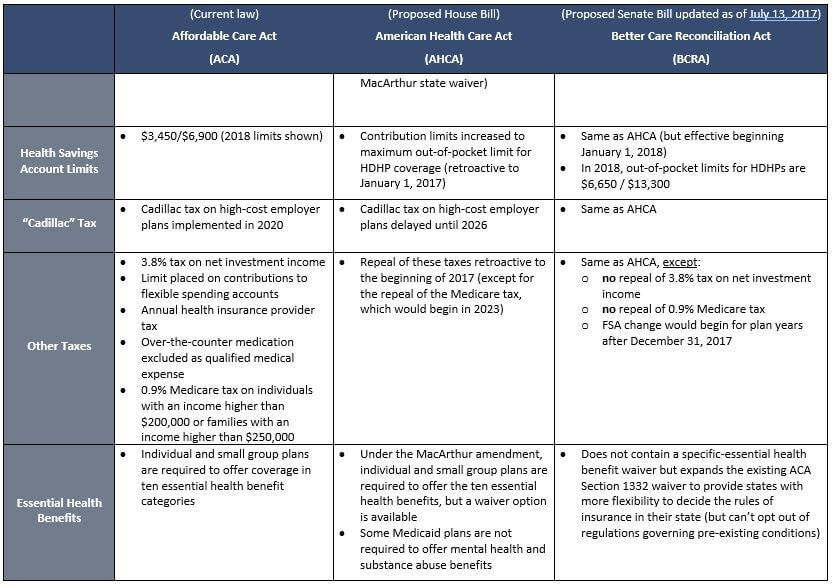 About the Author.  This alert was prepared for Broad Reach Benefits by Stacy Barrow.  Mr. Barrow is a nationally recognized expert on the Affordable Care Act.  His firm, Marathas Barrow Weatherhead Lent LLP, is a premier employee benefits, executive compensation and employment law firm.  He can be reached at sbarrow@marbarlaw.com.